An app for iPhone and iPad – now version 3.0

During sailing cruises managing the board cash box is usually not among the most popular tasks on board. However, one should keep track of the expenses and the cash position. And this is a just cinch with BoardCash.
BoardCash is of course suitable not only for the cash box on sailing cruises, but also for all other cases in which a group of persons are jointly funded—such as group travel, commune and much more.
BoardCash works completely offline.

In BoardCash you can enter all deposits of the crew members and all expenses from the cash box. Also special cases, such as when a crew member makes a purchase without paying from the cash box, are handled automatically. It is also easy to capture purchases, which include private purchases for individual crew members in the grand total.
BoardCashalso supports expenses not involving all persons, as well as a simplified entry for equal deposits of several persons. There is also an option to show the current cash balance in the cash box in all currencies you used.
Of course, BoardCash can also take different proportions of the crew member's cash into account (eg. with couples and individuals in the crew).
At the end of the travel, or whenever you want to draw a balance, you can view the final evaluation "Who pays what to whom" for your cash box with just one tap. Additionally the lists of expenses and deposits, including any receipts you have stored, as well as the final evaluation including the balancing can be printed or saved as PDF.

A very useful feature is the handling of multiple currencies. For this the current exchange rates of the ECB can be loaded into BoardCash. No matter whether the trip leasds through 2 or 10 currency zones, BoardCash always calculates the correct cash position and the account balances of the crew members in relation to a fixed standard currency.

The app BoardCash is compatible with the Add-on BoardCash of Logbook Suite, our popular software package for sailors and motorboaters, which is available for iPad, Mac and Windows.
The app BoardCash allows you to use the Add-on BoardCash on your iPhone.
Your BoardCash files can be copied between both apps using a cloud service or iTunes or using our synchronisation service SYNC. The functions for importing data from the digital logbook Logbook (crew list, port charges, fuel costs) are not shown in the app BoardCash. When your BoardCash file is opened in the app in Logbook Suite, all functions are available as usual.

The user-interface of the app can be set up to German, English, Dutch and Swedish.
The start window of BoardCash offers handy functions for opening, loading, saving, and deleting BoardCash files.

You can download the demo version of BoardCash from the Apple App Store. Entering a serial number converts the test version directly into a full version.
Licenses for the Add-on BoardCash of Logbook Suite are also valid for the app BoardCash.

For more information on BoardCash on our website for Logbook Suite. For information on the price and the link to our online shop, please use this link. 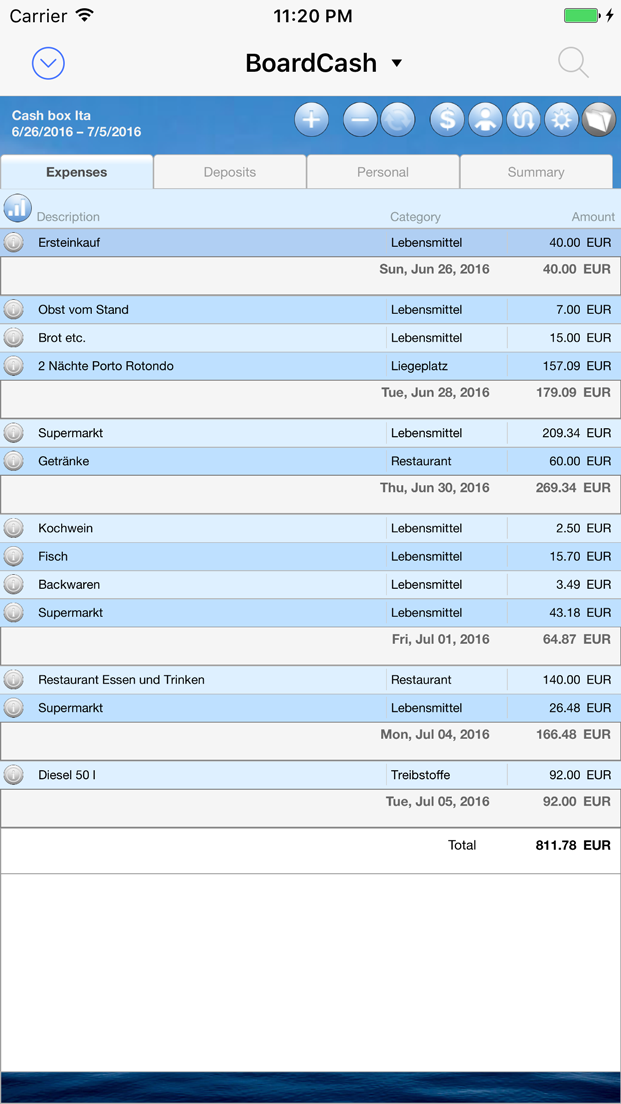 The current exchange rates of the ECB can be loaded into BoardCash. 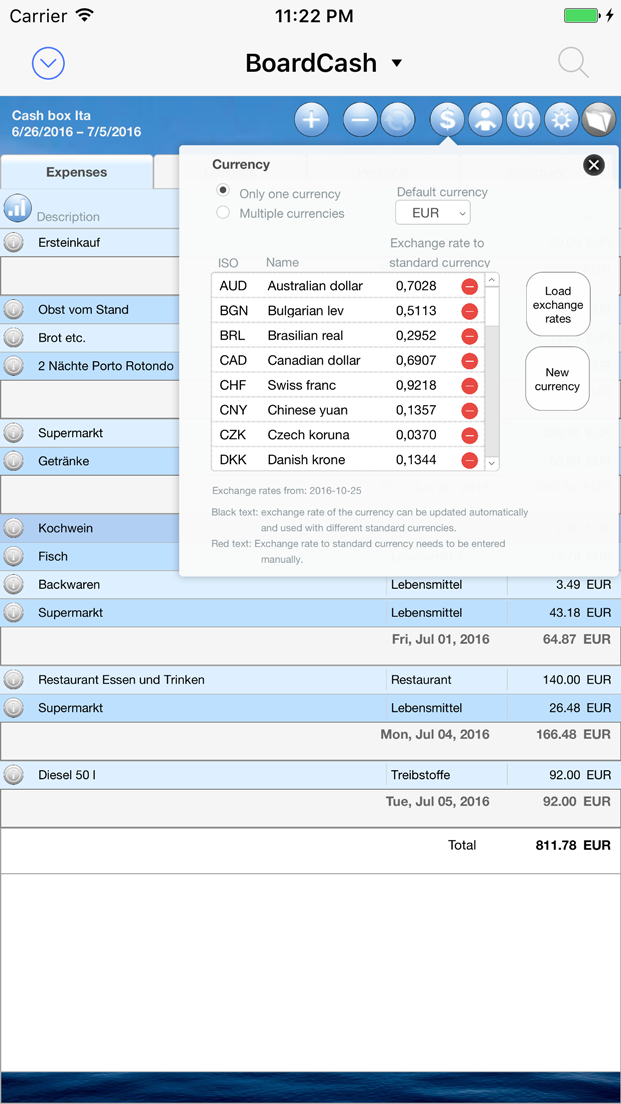 Entering a new expense payed with the credit card of a crew member. 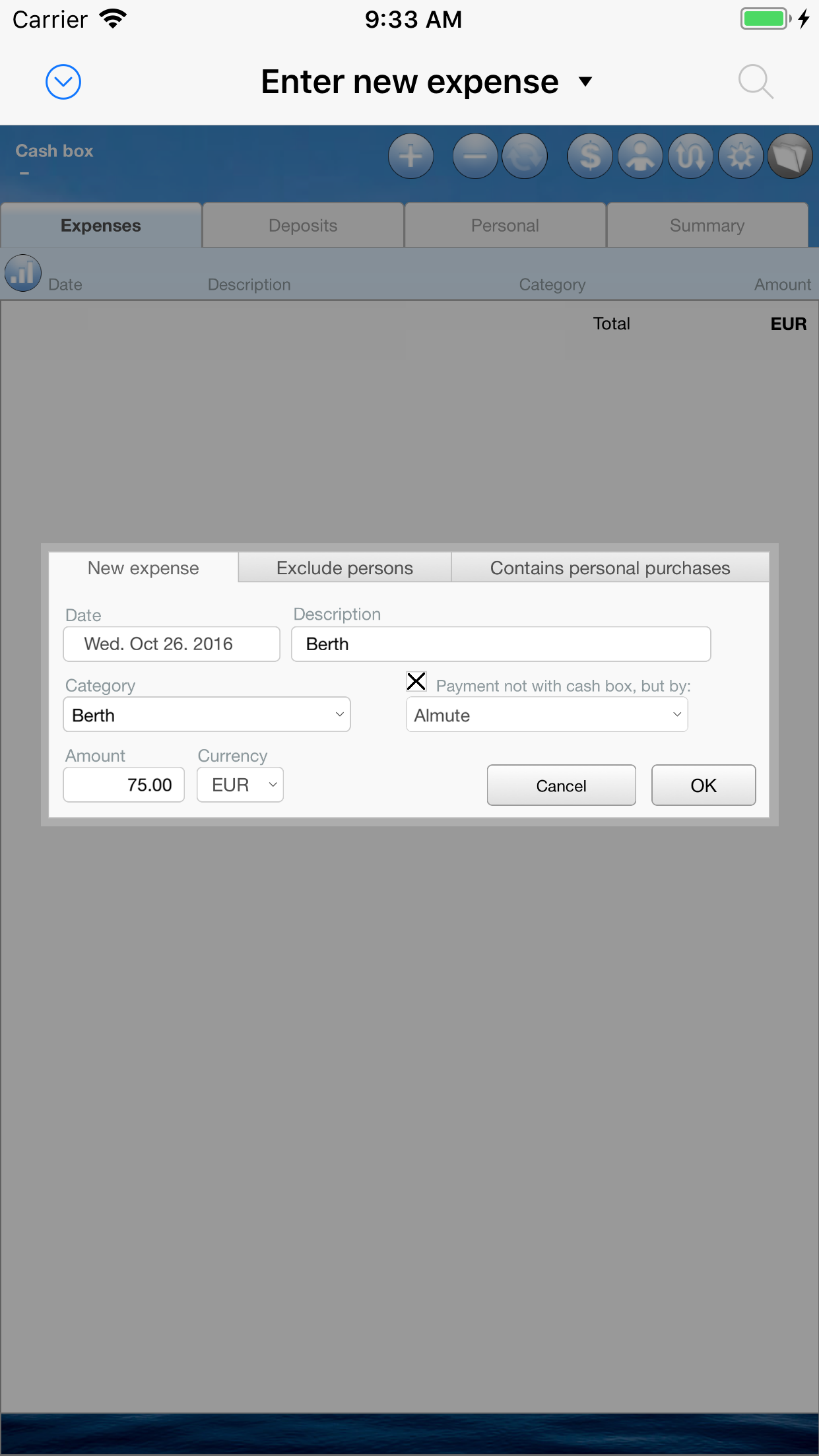 The final evaluation "Who pays what to whom" for your cash box. 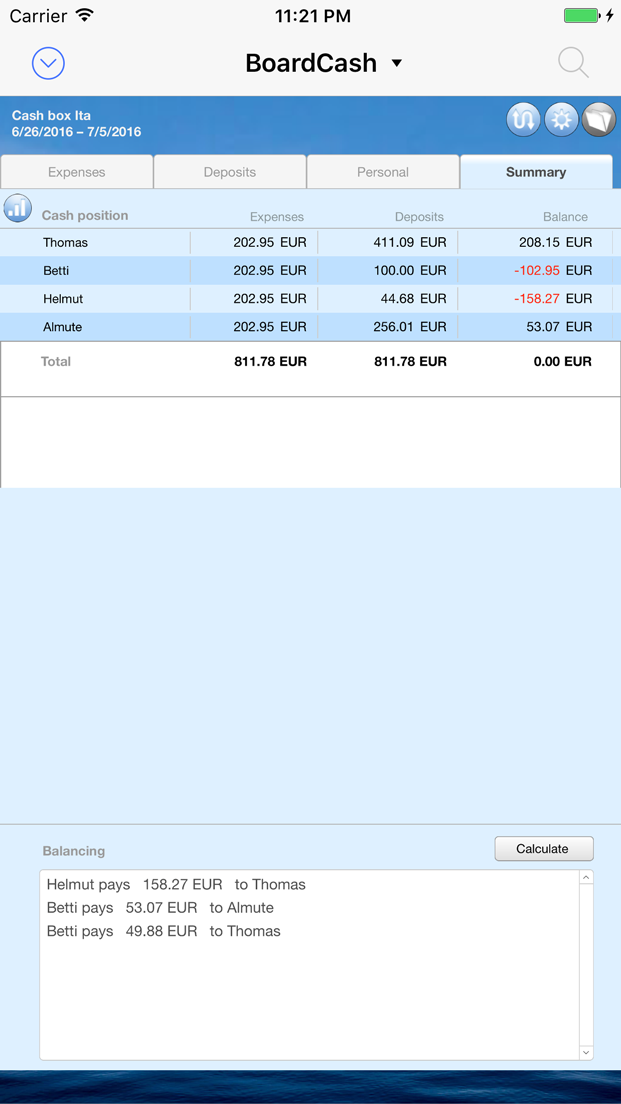 BoardCash is available for all iOS devices on the Apple App Store.